Why not check out the Dungeness Spit camping? The Adventure Van is slowly crawling towards being fully functional and it seemed like a good idea to take it somewhere not too crazy.  Being just shy of 3 hours away, including a ferry ride, it made for a reasonable choice.

The dogs loaded up, we headed out to spend a Sunday evening camping out under the stars.

Quite honestly I hadn’t planned this trip in excruciating detail and just wanted a park that was on the water, and not too far away. I hoped to take the dogs for a walk, cook some dinner and then go for a walk on the beach in the morning. We got in most of that, but more on the beach later.

While the wildlife refuge is, in my book at least, the main reason to visit this park, there are a few other reasons to stop here.

Primarily it is an excellent jumping off point for adventures in the area. Camping is limited to a 14 day stay, but that should give you plenty of time to explore the Sequim area attractions. One of my favorites is the Olympic Game Farm, which I suggest visiting early in the morning.

The Dungeness  campground itself

The Dungeness Recreation Area campground sits on a bluff overlooking the Strait of Juan de Fuca.  At any one of the viewing stations, you can look out across the water and watch ships and sea life passing, as well as the southern tip of Vancouver Island in the distance. 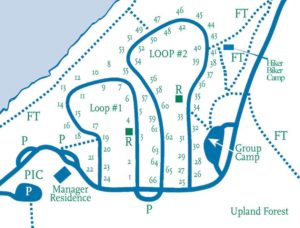 There are 66 spaces, about half of which are by reservation only, for most of the year. In my opinion though, the best spaces are in the first come, first serve area. I drove through both loops of the camping and camping spots and 10,12,13 are the best if you want to be able to easily access the trail along the bluff.

Being that I was there on a Sunday night in October, I scored space #12.  The gave me a large grassy area and directly adjoined a viewing area. Most of the trail along the bluff has limited views as the edge of the bluff is unstable. However, they do have viewing areas along the trail where you can get out and see everything.

Roads in the campground are exceptionally well maintained and campers with trailers or driving an RV should have no problem navigating the loops or getting into camp spots.   The only complaint I have about them is that some are exceptionally small, especially those on the inside of the loops. Don’t plan on getting a ton of sunlight either as virtually all are deep in the trees.

If you are doing an extended stay, the bathrooms do have showers at a reasonable $0.25  for 2 minutes. There is also a pump out station for RVs and trailers. Firewood is available for purchase as well.

On its own, the park is not that amazing. The biggest draw for me is the views along the bluff.

There is a loop trail that leads along the bluff and through several other types of terrain. I’m sure most of it is much more interesting in the spring and early summer. Being that I visited in October, the large swampy fields were very quiet with only a few small finches and other such birds flitting here and there.

It is interesting to see the fields of Snowberries in contrast to the grassy swamps or forests. You get that contrast of habitats in the quick walk around the park.

What there isn’t at this park is any beach access. The only way down to the water is via the wildlife refuge, which is fine if you don’t have dogs with you. I was really wanting to take them down and get them some beach time.

The primary draw to the park is, of course, the Dungeness Spit. Part of the Dungeness Wildlife Refuge, the spit is one of the world’s longest sand spits and the lighthouse on the end is the oldest one north of the Columbia River.

Because of its importance as a wildlife habitat and breeding ground, President Woodrow Wilson established the refuge back in 1915.

I didn’t take the 7-mile hike along the spit when I was there because I had the hounds with me and pets are not permitted for the protection of the wildlife. Next time I am out that way though, I definitely will be checking it out.

Dungeness Spit camping is nice. Not amazing, but definitely nice. As stated, I can see using the Dungeness Recreation Area campground as a jumping off point for adventures in the area. The people in the spot next to me seemed to be doing that.

One other reason to stop and camp here would be the sunsets. The west coast has some amazing sunsets, and looking out over the water as the sun drops behind the horizon is one of the most magical sites I can think of.  My suggestion is to go at off peak times, grab one of the good spots I mentioned and then make use of the viewing station to watch the sunset.